Connect and share knowledge within a single location that is structured and easy to search.

Should we lower the close/reopen vote threshold from five to three?

Update June 22, 2020: With no objection and consensus among the mods, we've decided to elevate this to the CM team.

Currently, it takes five votes within 14 days from users with the sufficient privileges to close a question (you can read more of the specifics about closing and reopening questions here in the help center). This is the default across the network.

Recently, Stack Overflow reduced this threshold to three. There is a TON of discussion on that post and others about why the threshold should be lowered, but the ultimate goal was increase the efficacy of individual actions. In other words, when a user with the close/reopen privileges votes, there should be a good chance that this will result in a question being closed/reopened.

Why lower the threshold?

Why does this matter? Imagine that you've voted to close a few questions, hoping to maintain a high quality of questions on the site. You notice that it rarely does any good. Bad questions just sit there until your close votes age out. Why would you continue voting to close? If we lower the threshold, there's a better chance that enough votes will accumulate to close the question, and you'll be encouraged to keep voting.

The opposite is true as well -- if you notice that closed questions are getting edited and improved, but your reopen vote never makes a difference, why would you try? A lower threshold means that not only will more questions be closed -- but more closed questions will be reopened as well!

This will not only help improve the quality of questions on the site, but it also encourages users to edit closed questions, since it increases the chances that those edits will trigger a question to be reopened.

Yes. SO ran a two week experiment where they tracked efficacy (how many questions completed the close/re-open process before the votes timed out) and actioned of count (how many times a close/reopen vote resulted in closing or reopening, respectively). This table summarizes their results:

Is there precedent for other sites doing this?

Yes. After the SO experiment, Hardware Recommendations.SE ran one of their own. They had similar results, and ultimately lowered their threshold to one vote. That's a bit extreme for us, but Hardware Recs gets a high volume of questions, so being able to clean those up faster was a priority.

Let us know if you like this idea -- a simple up or down vote will suffice, or feel free to opine in an answer.

We'll wait until 12 June 2020 (two weeks from today) to allow plenty of time for feedback. At that point, we'll then escalate this question to the Stack Exchange community management team (using the new process started in March) to implement the change.

Yes, we should change the close vote threshold to 3.

Can we quantitatively determine whether this is a good idea? What statistics can we gather to support the change? It's hard for us to run an experiment on this site because we get less traffic than Stack Overflow. We can, however, look back retrospectively at what has happened in the past.

I prepared a query on Stack Exchange Data Explorer (SEDE) that shows all the questions that were successfully closed or a close attempt was made. A total of 106 questions are listed, including some that were originally closed and later reopened.

The community is autonomous if it has the power to act without moderator intervention. Here's a histogram of number of close votes accumulated before the question was closed. The orange bar represents questions that completion of the close vote by community members. It's clear that autonomy is low right now. 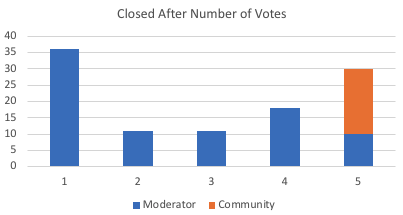 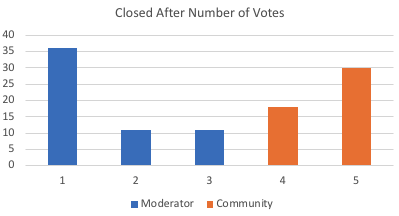 It's obvious that lowering the voting threshold makes the community more autonomous; here I have quantified how much the power would shift.

However, simply closing more questions is not a good metric for success. Ideally the right questions are closed, and they stay closed. For that, we should consider which questions were re-opened.

These are stunningly good numbers. They show that reducing the close vote threshold would not have introduced any new errors (a close followed by a reopen).

Reducing the close vote threshold to 3 would improve community autonomy, and would likely not lead to an increase in improperly closed questions.

Not the answer you're looking for? Browse other questions tagged discussion status-review vote-to-close .

Welcome!
This site is for discussion about Sustainable Living Stack Exchange. You must have an account there to participate.
Help

7
Why might the question on PCBs be off-topic?
5
What will our list of close reasons look like?
2
POLL: Should Sustainability.SE participate in the 2014 “Winter Bash” holiday hats promotion?
1
Automatic clean-up of unanswered questions
3
Are all these anti-wind questions coming from the same user?